You’re about as washed up as the Jersey Shore after Hurricane Sandy.
“Hey, can I have a ball?” (After refusal) “That’s OK; I’ll get one when you pitch.”
Who’s taking the loss today?
Show us your home run pitch
At least you can’t blow any saves sitting on the bench!
Ball. Ball. Go ahead and start with Strikes whenever you’re ready!
This is the guy we want!
You’ve been on the bench so long you’ve got enough splinters to build a house.
Nice change-up, but let’s see your fastball!
You’re gonna wear out the wood on that bench!
You in dry-dock down there?
Go out and throw some gas on that fire!
May as well go home (name of closer), we wont be needing you tonight.
The average age down there is deceased!
A no-hitter for you is when you go a game without hitting someone!
You glued to that bench?
Are you still active? Are you the bullpen coach now?
You’ve been cut, its in today’s paper!
Dead Man Walking!
You’re gonna blow up real good!
I hear you’re on your way to Cooperstown!, Go on Sat. and its 1/2 price
Nice uniform, where’s the Star Trek convention!
Isn’t it time you retired?
Does that Chewing Tobacco have steroids in it?
The camera’s on you, look busy!
First one of you to actually throw a strike can start next game!
I’ll pay for the pizza if you go get it!
Is it Father/Son day down there?
You better start working on a knuckleball!
Are you just sitting there waiting for next year?
You always lose control at the same time, right after the anthem!
Aren’t you the Waterboy?
I just saw your name on a Where Are They Now list!
Did you ever think you’d be sitting next to __________?
What’s it like owning a glass arm?
You haven’t moved from that bench in so long they should call you judge
Lookit! We’ve got the 7th,8th,9th & 10th starter
Bet you wish you went to college now!
How many pitches have you got?..work on a changeup, that’ll be one
You’ve got 3 pitches, slow, slower, and slowest!
You guys could probably start, in Medicine Hat!
How about giving that glove to Cooperstown? They’re starting a LOSER exhibit
I hear they’re grooming you to be the bullpen ballboy
I’ve got the scouting report on you, it says get you in ASAP!
Pitcher got a rubber arm!
You couldn’t save anything at a Kmart sale!

How’s the bus ride to (minor league affiliate),______?
Don’t give up, they might let you close……if we get up by 10
I’ve seen better arms on a chair!
I’ve seen better control at an AA meeting!
So this is what they call talent dilution
Are you guys really from New York?
Your Bio says all you throw is garbage, what does that mean?
Do you find all these empty seats distracting?
(Bullpen phone rings) If that’s my wife, tell her I left 5 min ago!
(Bullpen phone rings) That’ll be for me, I ordered a Pizza
Is it in your contract that you have to throw like a girl?
I only have to be here for 9 innings, but you have to play for the Phillies all year!
What position are you playing? Left-Out? 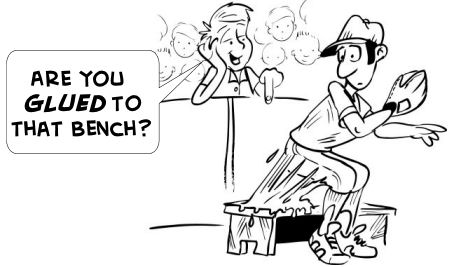