He’s going to take you so deep, you’ll think you’re a Malaysian Airplane
Stay Classy Pitch!
You couldn’t hold your dogs lead!
The last one of you to throw a no-hitter was the pitching machine
He’s going to take you so deep, you’ll think you’re a Chilean miner
Pitch him the deuce Meat!
You better get some tape, because you just got ripped!
Take off your coat, you’re inside
I’ve seen better arms on a beanbag chair!
Hey, how ’bout some sauce on that meatball?
This pitcher is pac-man…walka, walka, walka, walka!
The last time he found the plate twice in a row was at dinner!
I’ve seen more heat in a toaster
He’s going to re-gift your next fastball
Throw the Gyro!
Yoko Ono’s got better pitch control than you
I don’t think you’ve got time to teach him a slider. (Mound Trip)
Here strike zone, strike zone strike zone. Come here boy.
The plate hasn’t moved in 100 years and he still can’t find it! 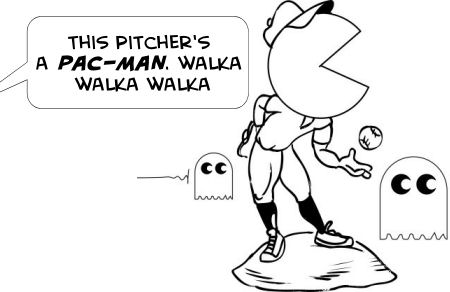 We should arrange a funeral for your dead arm!
Check the roster, you might be left-handed!
I’ve seen better pitchers at a Tupperware party!
We’re lighting you up like a christmas tree!
Call this pitcher a butcher ’cause he’s serving up the meat!
You could have started a car with that jump!
I’ve seen more heat in an EZ-Bake oven!
Hey pitch! Why do you keep hitting our bats?
You can fill a closet with all those hangers!
I’ve seen better curves on a square!
Serve it up snack bar!
The pitcher is as dirty as the ball he just threw!
This pitcher is dealing more junk than Fred Sanford.
I’ve seen better pitching in T-ball!
This guy’s falling apart like a Wal-Mart Sweater!
I’ve seen better pitches by a used car salesman!
You couldn’t save a Word file!
Call the zoo, he’s getting wild!
Flip him over coach he ain’t done yet!
Open the screendoor he is outside!
You couldn’t strike a note!
The way that ball was dancing, you know it wasn’t Southern Baptist!
Beethoven had better movements!
You’re supposed to drop and roll when you get burned!
You better get a black top hat, a cape and a magic wand because you ain’t fooling anyone with your stuff!
One finger means fastball, not one mile an hour!
The harder you throw, the farther they go!
I hope you got your degree!
This pitcher is like the family car, everyone gets to drive him!
The pitcher’s got nothing on the ball but his hand!
I’ve seen better curves on a dragstrip!
I’ve seen better pitchers in a bar room!
I’ve seen better junk in a junkyard!
I’ve seen better windups on a toy!
Nice pitch! It’s might not be that fast, but at least it’s straight and down the middle!
Maybe Sherlock Holmes could find the plate for you!
How about a donation for this walk-a-thon!
I’ve seen better curves on a road!
Call a search party cause this guy can’t find the plate!
I’ve seen hot dogs with more mustard on them!
This must be the Top 40 Countdown, the hits just keep on rolling!
Get a snorkel because he just took you deep!
You couldn’t pitch hay!
Seen better picks in an afro!
You are going to have to ride the SHORT bus home!
I’ve seen candles with more heat!
You spend more time near rubber than a tire salesman!
There is more heat in an Amish home!
You couldn’t strike a pose!
Hey Pitch, Take off the oven mitt!
You couldn’t throw rice at a Chinese wedding!
No, Really, throw a fastball! 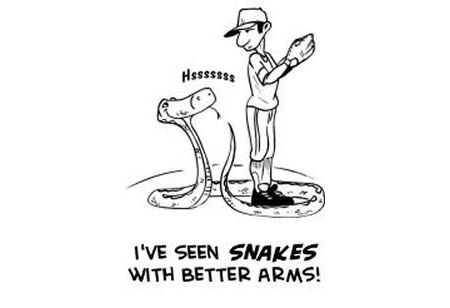 Hey, lunch meat – keep serving that baloney!
Click your heels 3 times and repeat after me…..there’s no place like home, there’s no place like home, there’s no place like home!
There’s a fight at the bat rack!
You couldn’t strike out Stevie Wonder!
You pitch like the plate is high and outside!
They’re opening up another can of pitchers!
He’s got one higher than that!
First pitch ceremony is over!
He’s got nothing but his glove!
We’re going to hit you so hard you’ll get whiplash!
He’s an equal opportunity pitcher, everyone gets a hit.
He must be the Pillsbury Dough Boy cause he just got poked
Someone call 911…They are killing him!
How can you throw with both hands wrapped around your neck?
This guy only throws the ball 55 feet!
Have a nice shower!
I’ve seen better moves on Soul Train!
They show movies on that flight?
What kind of pitcher are you? Chuck and duck?
You’ve been hit so hard you’re glowing!
That pitch wasn’t even in this time zone!
Stick a fork in him!- that Pitchers done
I could walk alongside that pitch!
Its raining Baseballs!
Help, he’s choking!
Are there any doctors in the house? Anybody know the Heimlich?
Batting practice!
Better get the bullpen busy
You couldn’t pitch hot biscuits to a hungry dog
I saw your fastball pictured on the side of a milk carton!
You might as well have them hitting off a tee!
Get him a bucket, he’s throwing up!
Put a coat on that hanger!
You couldn’t pitch a tent!
You might not be tired, but the outfielders are!
The catchers throwing the ball back harder than you’re throwing it in!
You couldn’t throw a tantrum!
Who’s calling the pitches?
Pitcher got a rubber arm!
Just bring in the pitching machine!
Throw the ball, not the game!
With this guy pitching, the ground crew will have to drag the warning track after the fifth inning!
You may as well let him toss it up and hit it!
I could time your fastball with a calendar!
You need to learn a new pitch-it’s called a strike!
Leave him in, we’re not done with him yet!
Someone go out there and put another quarter in the pitcher!
Wind him up again coach!
You should have a disclaimer, allow four to six weeks for delivery!
You couldn’t strike a match!
You need a cut-off man for your pitches!
That ball was so far outside it had a hat and coat on!
You couldn’t throw the cat out of the house!
Hey, the UMP could steal on this guy!
Pitchers got a Big Butt! (In the movie “The Last Rookie”)
I’ve seen a better arm on a box of baking soda!
Get him an L screen and a bucket of balls!
This guy is Grade A beef!
Put the spinner in the tackle box (Bad Curveball)
Why don’t you just tell him its coming and stop wasting our time (repeated pickoff attempts)
You couldn’t throw a party!
You’ve got a great 55 foot 6 inch curve ball!